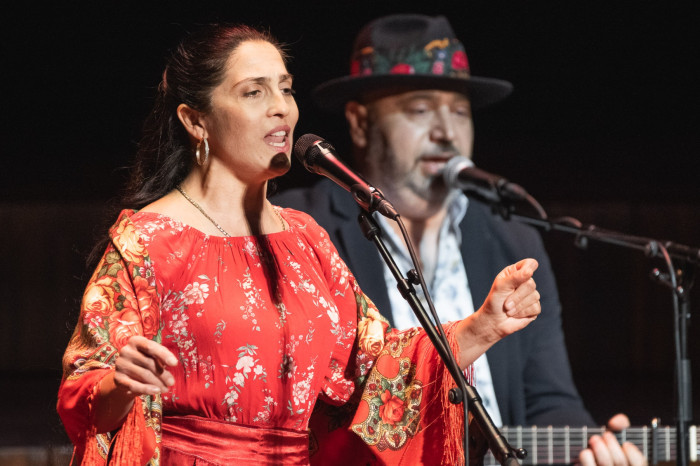 The World inside Great Amber / Hungary

This spring, the educational series of events The World inside Great Amber of the Liepāja concert hall introduce the ambassador of Gipsy folk music, the owner of an exquisite voice Mónika Lakatos, and her band, the Gipsy Voices, who perform their only concert in Latvia here, in Liepāja.

The night of world music will be brightened by the eloquent and impulsive rhythms of gipsy music, its fiery expressivity, passionate improvisation and natural synergy of song and movement, along with bittersweet and heartbreaking melodies that reveal the fate of its people and the deepest corners of the heart. Listeners will be introduced to the sounds of Gipsy music through pieces from the band’s new album, Hangszín.

Through the ages, music and song has been a way of communicating for Gypsies – Romani families are not accustomed to expressing their feelings, emotions or love in words. It is done through song. Music plays a special part in the community – it is much more than mere entertainment or a pastime activity. Music is a language and a means of communication.

Together with the Gipsy Voices, Mónika Lakatos performs the ethnic songs of Olah Gypsies in their original sound, just as they have been sung in the musicians’ families since they were small children. “We use traditional instruments in our concerts – water urns, wooden tubs and spoons, as well as the guitar, which complements the sound. But the soloist’s voice always takes center stage. Since ancient times, singers have been the ones most respected in the community, they would create and pass on their personal interpretations,” reveals Mónika, whose gentle exterior hides a powerful voice.